Puzzle & Dragons Z tells a story we've all heard several times before. There's a young child with the power to tame fantastical creatures, an evil force bent on taking over the world, and you need to defeat said evil force by defeating hordes of monsters through the age-old medium of tile-matching. Well, maybe not that last part, but if Puzzle & Dragons Z sounds a lot like Pokemon meets Candy Crush, then you wouldn't be entirely wrong.

Except Puzzle & Dragons Z + Puzzle & Dragons Super Mario Bros. Edition isn't so much an ill-fated Pokemon: Link Battle clone as a repackaged retail version of the popular free-to-play mobile game of the same name. While the series might not hold much weight over here, Puzzle & Dragons is wildly popular in Japan and you can even download it on Android and iOS right now should your curiosity get the better of you. 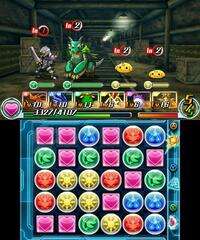 It's certainly an intriguing addition to Nintendo's handheld line-up, not least in light of its recently announced partnership with DeNA to bring some of its most coveted characters to mobile phones later this year. Here, we see the process in reverse, but thankfully Puzzle & Dragons Z is more than a simple port of its free-to-play predecessors. Instead, developer GungHo Online has practically rebuilt the game from scratch, beating down all of its in-game currency walls and laying its cards on the table from the very beginning.

For instance, monster eggs are now dropped randomly throughout the main dungeons, allowing you to steadily grow your ranks as you progress instead of chancing hard-won Magic Stones at the randomised Rare Egg Machine. Likewise, your team can also level up via experience points gained in battle rather than relying on random coin drops, a move that will no doubt please and be instantly more familiar to incoming Pokemon fans. 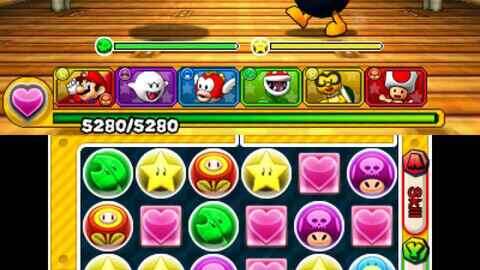 ^ In addition to P&DZ, you also get a stand-alone Mario version that replaces dragons with well-known Mario enemies

That's in addition to the rather more sinister practice of 'feeding' them excess monster eggs you don't need. However, you don't always know what monster you're going to get when you pick up an egg, and we wish we didn't have to choose between hatching them, which puts them firmly off the level up menu by making them part of your team, and throwing them down our monsters' hungry gullets.

The Mario version, for instance, handles this much more effectively, as you're told straight away which classic Mario enemies you acquire at the end of each stage and are then given a choice whether to combine them with other characters to power them up when you next visit a Toad House. 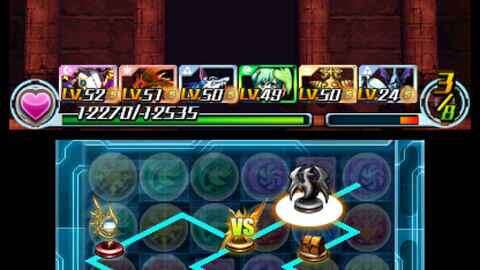 ^ There are multiple routes to take in each stage, but every battle is just another round of tedious tile-matching

In fact, the Mario Edition is so much more approachable and straightforward that it's almost hard to believe the two games were made by the same developer. For instance, whereas Puzzle & Dragons Z seems determined to string out the number of egg drops and vital evolution chips you receive, the Mario edition is positively bursting at the seams with everything you need to help make your squad bigger and stronger. This makes Puzzle & Dragons Z feel a little stingy by comparison, especially when its total critter count only reaches a modest 100 compared to the 1000s on offer in the mobile version.

As a result, it's not long before a certain level of tedium sets in while playing Puzzle & Dragons Z, and it can often feel like you're not making much progress at all. It also doesn't help that the tile-matching part of the game is equally tiresome. Played out on a six-by-six grid, you attack enemies by matching at least three orbs of the same elemental colour in a line or column. Align five in a row and you can dole out a group attack, and naturally the more combos you rack up, the greater amount of damage you'll inflict.

This isn't a simple game of rigid Candy Crush swaps, though, as you can drag an orb anywhere on the board, knocking others out of alignment to create additional combos en route to your destination. There's no time limit forcing you to make snap decisions either, but you'll only have around five seconds to drag your intended orb once you've picked it up. 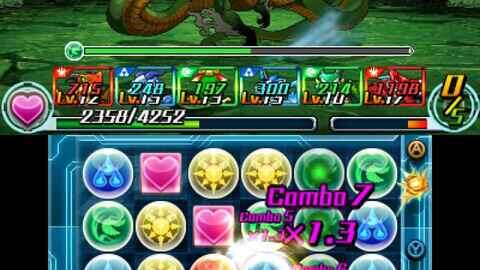 ^ End of area boss battles are a bit more challenging than the regular end of stage boss fights, but even these can be defeated without taking a scratch if you gain enough combos during its cool-down period.

This should make for a more calculated game than other orb puzzlers, but outside of the handful of final area boss battles, enemies are so laughably underpowered that you can often sail through with just one or two combos each turn for the first couple of hours. They deal so little damage that you rarely have to worry about losing, and even if you do find yourself in need of a quick patch-up, the abundance of healing orbs available should be more than enough to keep your life bar topped up for the length of each stage.

The same goes for the Mario Edition, only it's even less of a challenge than Puzzle & Dragons Z. Here, several team mates have dual elemental attributes, allowing them to attack twice on the same turn depending on whether you cleared both types of corresponding orbs. We could also do without the incessant cut-scenes where NPCs show up to make sure we're making the most of the game's various features.

We applaud GungHo's efforts to make its mobile creation a better fit for handheld consoles, but the resulting game is just too unbalanced to hold the attention of its clearly intended target audience. We only hope Nintendo and DeNA's mobile efforts are more substantial when they arrive later this year. 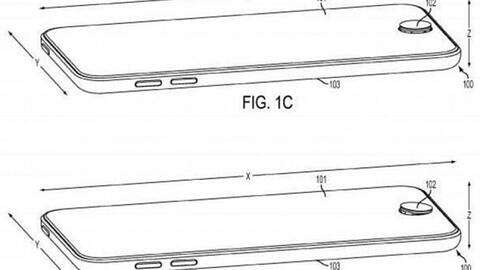