The much-leaked Samsung Galaxy View has finally been officially revealed. While the leaks have turned into a torrent of specs rumours and marketing shots, this is the first time we've been able to get hands-on with Samsung's kitchen tablet.

And I do mean kitchen tablet; there's no better place for this 18.4in Android slate. 18 inches is about the size of what you probably remember as your old kitchen CRT television set, but instead of taking up an entire shelf, the Galaxy View can be carried around with a built-in handle and set down anywhere with even a small amount of space available. 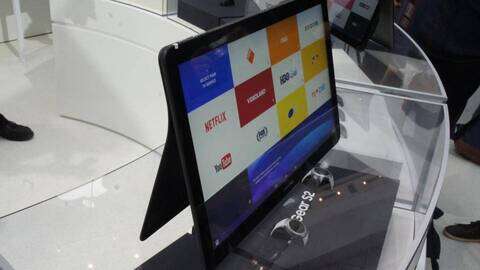 And instead of access to just the five terrestrial channels, you get the entire internet at your fingertips. The tablet's Android OS has been designed around media consumption, although during my hands-on time it wasn't particularly polished or, more accurately, finished. Currently, the home screen is just the standard Samsung TouchWiz offering, but a Samsung representative suggested that this would be replaced by a more media consumption-friendly grid interface. Indeed, at the bottom-right of the home screen there's a small button that opens up a grid of media apps.

Netflix and YouTube were present on the grid while some other names I was less familiar with also showed up. It's not clear whether there will also be an app that allows you to stream from your Samsung TV to the Galaxy View, but if this isn't something Samsung has in the works, it's missing a trick.

There's also a photo interface called Family Square, that lets you do a bit of digital scrapbooking, making collections of images that can be shared with friends and family. 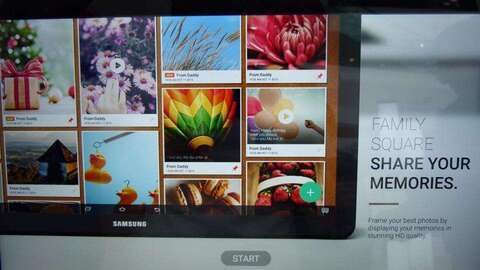 More interesting than the operating system is the physical design of the device. Unusually, the stand does not allow the tablet to lie completely flat. Instead, this permanent fixture has two modes: standing up and lying nearly flat. Standing up, the tablet has a slight rearward lean, making it perfect for watching from a distance. Lying down, the tablet sits at a slight angle, making it better for putting on a surface that's below you such as a coffee table or your lap.

Because the stand is always in one of these two positions, there's no chance of you ever using the 2.65kg Galaxy View handheld. It makes complete sense to not compromise on the stand for the rare time you might want to pick this thing up with two hands.

While I haven't had this confirmed, the Galaxy View appears to be powered using an external power brick. There's a Micro USB port as well, but the presence of a DC input suggests this will be for data transfer only. 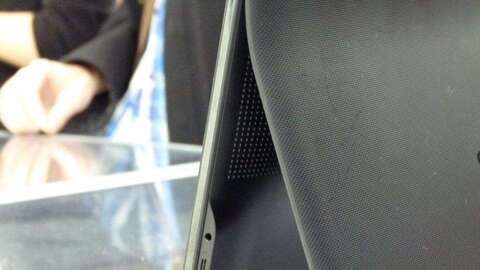 Samsung reckons the tablet will last eight hours on a single charge although under what circumstances this is possible is not clear. Still, with such a huge amount of real estate, the chunky 5,700mAh battery should keep the tablet going for several hours.

There are stereo speakers at the rear of the tablet, and while the test environment I was provided with was a public shopping mall in West London, they were still able to cut through the noise of escalators, mall music and other tech journalists. There's 2GB of RAM and 32GB of storage while a 1.6GHz, octa-core Samsung Exynos 7580 will provide the processing grunt.

Leaked pricing (you can see a theme here) points at the device costing $599, which is around £469 with VAT included. When I get more official, non-leaked information, I'll update this piece.

The Galaxy View makes a lot of sense; many people will scoff at its hilarious dimensions, but they're not the target market. Being able to carry your catch-up TV with you around the house on a screen that's big enough to watch from a distance will be a huge boon to many people; if the price is right it could be a hit. 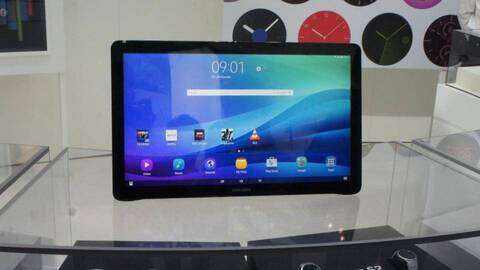 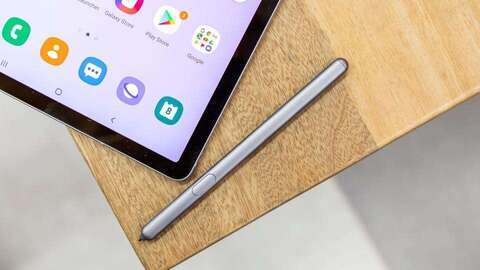 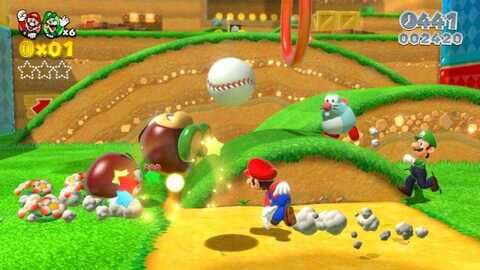