Gaming laptops are steadily shrinking, and Asus’ latest – the ROG Strix Scar II – pushes the envelope for 15.6in laptops. Despite weighing only 2.4kg, Asus has managed to cram in Nvidia’s GeForce 1070 and a 144Hz display that’s worthy of even the most serious gamers. And the best bit? it doesn’t look half-bad either.

At a mere whisker over 26mm thick, Asus hasn’t managed to accommodate Nvidia’s top-ranking GPU, but the Strix Scar II still gives you two very capable choices – the 6GB GeForce 1060, or an 8GB GeForce 1070. Those GPUs are allied with either a quad-core Intel Coffee Lake Core i5 or a six-core Core i7. Factor in anything up to 32GB of RAM, an NVMe PCIe x4 SSD, and a 1TB 2.5in drive for storage, and the Strix Scar II is a bit of a monster in its weight category. 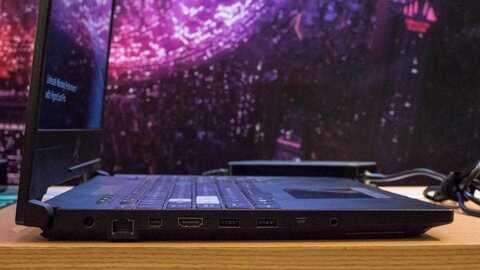 Asus clearly had to work hard to prevent all that from melting into a pile of plastic. It’s employed upgraded 12 volt fans, and swapped out the 59 blade fans of the previous generation for 71 blade versions. Thanks to the new super thin blades, the decrease in air turbulence has allowed Asus to increase the fan speed by 20% while dropping the noise output – and if you do want to work in silence, you can always toggle the fan speed with a super-quick key combination.

There are plenty of other performance tweaks under the hood, too – plenty of which bode well for longevity. The heatpipes now have extended cladding which keeps the chipset components under 90c, and the anti-dust cooling helps to whisk dust in and out without it getting stuck in the fan blades.

One brilliant touch is the trapezoid cut lid. Look at the rear of the display, and Asus has cut out a chunk to prevent it obstructing the air flow from the vents at the rear. This apparently improves thermal efficiency by up to 27% from the previous designs. 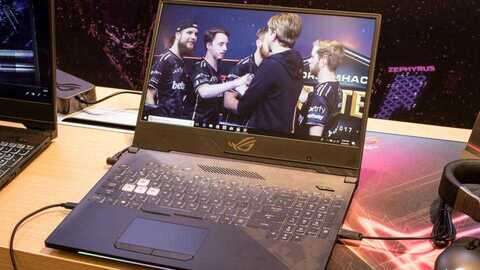 This is arguably one of the key selling points for any gaming laptop worth its salt, and the Strix II delivers – its display has seriously tiny bezels, and seriously nice specs. The Full HD resolution gives the Nvidia GPUs a fighting chance of delivering framerates that’ll make the most of the 144Hz refresh rate, and the 3ms response time (measured grey-to-grey, naturally) keeps the action ghost and smear free. Image quality looks pretty darn good, too, and the pleasingly vibrant, saturated colours we saw suggested that the claimed 100% sRGB coverage wasn’t too far from the truth.

There’s nary any flex in the backlit keyboard, and with each key rated for a touted 20 million keypresses, this is a laptop that’s designed to take a hammering from gamers day in and day out. What’s more, that keyboard has what Asus describes as Overstroke. Far from being a feature that your cat will enjoy, however, Overstroke simply means that the 1.8mm travel keys actuate earlier, to provide a quicker response. 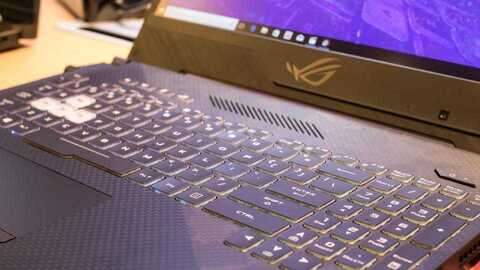 And if you just can’t live without a bit of RGB excitement in your life, then Asus has you covered. The Strix Scar II supports Asus’ Aura Sync software and provides RGB lighting across the ROG logo on its lid, a strip across its front, and right across its keyboard. Suffice to say, if you want your laptop to light up like a unicorn with its ass on fire, you can have your wish.

There’s plenty of connectivity chucked in for good measure, too. You get a pair of USB 3.1 Gen 2 ports – one in USB-C guise, one in standard USB-A – a pair of slightly slower USB 3.1 Gen 1 ports, and it’s great to see gigabit ethernet make the grade too. There’s no sight of the super-fast wireless 802.11ax connectivity found on the ROG Rapture router launched alongside the Strix II, but a 2x2 802.11ac connection and Bluetooth 5 should do the business for most gamers. 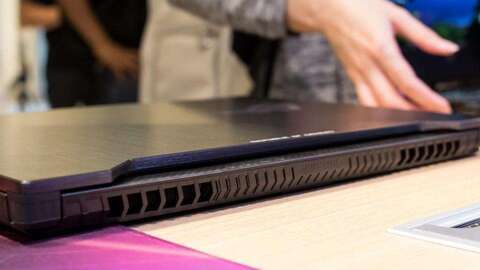 There’s a lot to be said for a gaming laptop that provides serious power without turning your rucksack into a dead weight. Reassuringly, the ROG Strix Scar II isn’t just designed to be light – there are plenty of thoughtful touches to improve performance and longevity, and it has the kind of feature list which should help eke out the best from talented gamers. There’s no confirmed retail price as yet, but the Strix Scar II is looking to be just a little bit special. 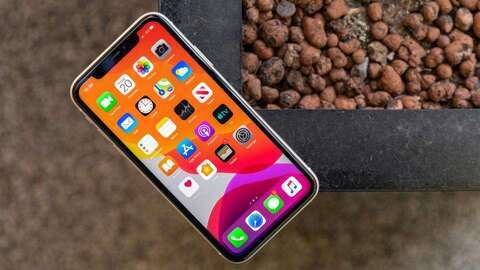 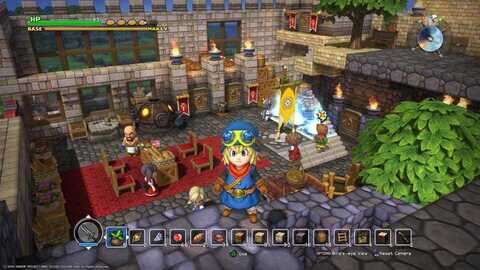