Coming in below £300, the HF R206 is right at the budget end of the HD camcorder market. But despite this, it looks pretty slick, feels well-built and has some specifications that really stand out at this low price. Its main rival to date is the £350 Panasonic HDC-SD80 ; although the competition is rather limited, as that camcorder proved to be a shadow of the excellent Panasonic HDC-SD90 at £400. 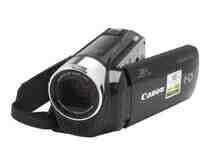 The HF R206 is one of three nearly-identical models, alongside the R26 and R28. Both of those camcorders come with built-in flash memory, 8GB and 32GB respectively, but in every other respect the three are essentially identical. Only the exterior colours vary, with all the pictures here being of the black version of the R28. Prices will always fluctuate, but usually we find that an SD-card only camcorder, and a couple of large memory cards, will prove better value than buying a model with built-in storage.

This leads on nicely to one of the R206's standout features - its twin memory card slots. Canon has provided twin card slots across its whole range of HD camcorders, and so they feature here despite the R206's budget price and relatively small dimensions. You can pick up 16GB SDHC cards for around £15; two of these would provide you with 32GB of storage, and the R206 will switch between them, without troubling you, when one is full. 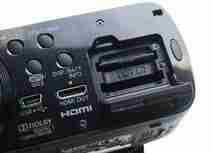 32GB may sound like a lot, but you'll get through all that storage in two hours and 45 minutes at the highest quality setting. The R206 is notable for being the first truly budget HD camcorder to shoot progressive scan video, and at a terrifying 24Mbit/s in its MXP mode. If you want to conserve storage, then we found the 1080i, 17Mbit/s FXP mode captured an indistinguishable amount of detail, though it obviously doesn't have the film-like appearance to motion that discrete frames provide.

The lack of difference in detail stems from the relatively small 1/4.85 sensor, as there's only so much such a modest sensor can resolve. That said, the sensor here is larger than the 1/5.8in one in the HDC-SD80, and that shows in the resulting footage. Shooting with both in slightly overcast daylight, the R206 immediately leapt out as the better device. There was more detail in images, the edges of objects were crisper and this lent a sense of depth to the image. That said, it doesn't give you that 'being there yourself' feeling, with some minor artefacts and softness spoiling the illusion, unlike with the more expensive Panasonic HDC-SD90 .