As EV sales are surging, Europe is trying to enhance its capacity to produce batteries domestically, instead of fully relying on Asian countries such as China, Japan, and South Korea, which are currently the major global manufacturers. 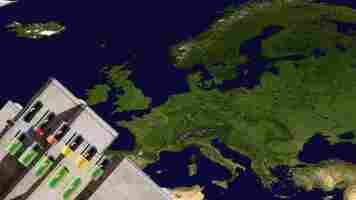 As of May 2021, 38 battery cell gigafactories are being built or planned in Europe and the UK, according to the latest report by the non-governmental organization Transport & Environment.

Out of the 38 projects, 17 have secured funding so far, estimated to be up to $30 billion between them. The amount consists of both private and public funding, including, for instance, Tesla’s gigafactory in Berlin, which received $1.4 billion in German federal and state support.

Ten other projects have secured partial financing and support, making up at least $16.8 billion in potential investments. These include numerous national projects, key to Europe’s battery autonomy, notably Verkor in France, Britishvolt in the UK, Italvolt in Italy, Basquevolt-Nabatt in Spain, and Freyr in Norway.

In addition, 11 more gigafactories have recently been announced, but still lack firm commitments regarding location, planned capacity, and investment.

What’s the good news? If all 38 gigafactories come through, 462 GWh worth of battery cells could be produced in 2025 and 1,144 GWh in 2030 – that’s 13 times higher the current European supply of 87 GWh in 2021. According to Transport & Environment’s analysis, this would give Europe one fifth of global cell production by 2025, rendering it second only to China .

But while the estimated total 1100 GWh output of the factories would enable Europe to power over 90% of all new vehicle sales by 2030, a slowdown in electric vehicle sales would seriously jeopardize its chance to become a global leader.

This means that there will need to be a continuous increase in CO2 emission targets to incentivize car makers to escalate the manufacture and sales of EVs by the same year.

We ranked the best (and worst) EV pedestrian warning noises

Electric vehicles are fast and stealthy. With no combustion engine or exhaust noise, they have the ability to sneak up on pedestrians without much of a warning. This is bad enough for the average road user, but for the visually impaired, it represents an even bigger danger. 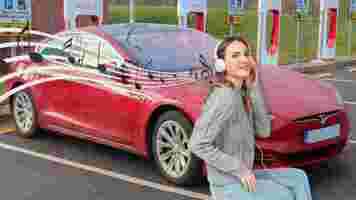 Thankfully, legislation that requires EVs to make an audible pedestrian warning has been passed in a number of important EV markets, like the US , and Europe .

The sound a car makes can embody and amplify what type of car it is. True to form, aggressive sports cars bark and snarl, while luxurious vehicles can be quiet and refined. With electric vehicles making virtually no noise, manufacturers have the opportunity to design what noise their cars make from the ground up.

But which is the best? SHIFT put it to the floor of the TNW editorial office to find out.

The Porsche Taycan was a unanimous winner among car people and non-car people alike. Somehow, the German automaker has managed to embody the essence of control, speed, and power into a sound.

Even though the noise is designed to alert other road users of the car’s no doubt swift arrival, Porsche has developed a sound that evolves from a low hum to a Phaser-like euphony of electrons. TNW’s managing editor Abhimanyu Ghoshal was “digging the Porsche stuff,” because “it sounds like speed.”

None of the TNW staffers really batted an eyelid toward the Audi e-tron, most likely because its sounds just work, which make it worthy of an uneventful second place.

If you were to describe what the Audi e-tron sounds like, you’d say it sounds, well electric. Truly inspiring. When stationary the e-tron emits a synthetic whir that builds as the vehicle begins moving. It’s exactly as you would expect, and no doubt was designed to be as inoffensive to as many people as possible.

TNW’s publisher Anouk Vleugels, aka my boss, gave some wonderful feedback on the Renault Zoe, although it’s not that positive. According to Anouk’s well-trained ear, the Zoe sounds like a vacuum cleaner. Well that sucks.

As much as I respect Anouk’s eternally well-informed opinions, I’m not sure I agree entirely. The Zoe holds a special place in my heart, because it was the first EV that drove by me in public that made me stand back and go: “Wow, that sounds like a goddam spaceship.” It’s a sound that immediately conjures images of the future and whizzing around in flying cars like the Jetsons. It’s exciting.

I’d be perfectly happy if all EVs sounded like this. Although, if I’m to meet Anouk halfway, let’s just agree that it sounds like the confused love child of a Stanley Kubrick-inspired spaceship and a home cleaning device.

The Chevy volt is meh

Despite being a popular EV in the US, the Chevy Volt‘s pedestrian warning noise did absolutely nothing for us. One of my colleagues, who shall remain nameless, said it was “worse than the Renault.”

The more I listened to it, the less inspiring I found it. But it also struck me, I’ve heard this sound before — in a spa!

Picture it now: you’ve just placed your belongings into a locker, and slid into your robe as you sashay across the threshold that separates the front, publicly imbued section of the spa, into the private and secretive part where our stress and tensions dissolve as soon as we hear that sound.

The Chevy Volt is that enigmatic yet mysterious hum that all spas play to distract us from the chaos of the outside world and provide us an aural cushion on which to rest our weary souls.

Kill it with fire

The unanimous loser though, is this Amazon delivery truck that’s made by EV startup Rivian.

Now, Abhimanyu is certainly not a violent man, but he vowed to “shoot that Rivian van if it ever drives past” him.

Put simply, the Rivian’s pedestrian warning sound is too noticeable, and it attracts the ear too much — it’s disconcerting.

It actually makes me feel nauseous. Somehow, as the van drives forwards, it sounds like everything is happening in reverse. It’s as if a robot has recorded a devil’s interval , on a cheap 8-track, and been a bit overzealous with the tape delay. That’s sound engineer speak for, “It sounds unsettling and crap.”

I still want a V8

Maybe you’ve made the switch to electric vehicles for the good of the planet and to reduce your personal carbon footprint, but you’re missing the sound and character of good ol’ petrol engines. Well fear not!

There are aftermarket customization options which can bring the old school character of a gasoline car to your electrified ride. Check out the video below which demonstrates one such system.

It uses a collection of external speakers, routed through pretend exhaust hardware, to project a combustion engine sound out of an electric car. An accompanying app gives the owner almost limitless control over the synthetic exhaust note, you can make it sound like a V8, a V12, and add overrun to get that rally car crack and pop as you lift off the accelerator.

If customizable options like this become commonplace on EVs, the roads might not change to a totally futuristic sound just yet. But overall, it certainly seems that the soundtrack of our streets is becoming a futuristic cacophony of disorienting digital whale song.

Tesla Model 3 dominates all other EVs in France, Germany, and the Netherlands

March’s EV sales figures for Europe are starting to come in, and would you believe it, the Tesla Model 3 is back on top. 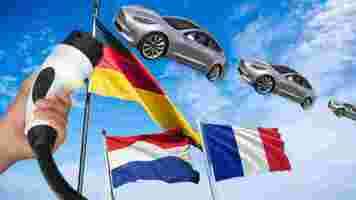 The Tesla Model 3 was the number one selling EV in Germany, France, and the Netherlands, according to figures shared by EV-Sales blog .

In fact, four of the top six electrified vehicles sold in the country in March were made by VW.

Further west in France, the Tesla Model 3 was also the most popular EV, and by a long way.

Unsurprisingly, offerings from home country brands Peugeot and Renault also proved popular. In fact, six of the top ten EVs sold were made by the French pair.

With no local brands to chose from, the Netherlands‘ favorite EVs is a more holistic affair, but one thing is certain, the Tesla Model 3 was the most popular selling 341 units in the low lying nation.

The Swedes and Germans took second and third spot with the Volvo XC40 PHEV and the VW ID.4, selling 257 and 247 units respectively.

While brands like Peugeot, Renault, and VW are bringing noble and worthy offerings to the market, no one vehicle seems capable of knocking the Tesla Model 3 off the top spot.