Samsung is the latest entrant into the booming mini camcorder market. Its HMX-U10 follows in the footsteps of Sony's MHS-PM1, but goes one step further. The PM1's video resolution of 1,440x1,080 was a big step up from the 720p sensors found in most mini camcorders, but the U10 tops this with a Full-HD resolution of 1,920x1,080 (1080p).

Before you get too excited, however, it's worth noting that higher resolutions don't necessarily result in drastically improved video, as the MHS-PM1 showed. The HMX-U10 has the biggest sensor we've seen, measuring 1/2.3in, but the 10 million pixels packed on to it suggest that it was originally intended for a digital camera rather than a camcorder. All those pixels are useful for taking stills in good lighting conditions, a task the HMX-U10 manages better than any other mini camcorder, but for generating two-megapixel video they're redundant and can generate unwanted noise.

In decent lighting conditions we were impressed by the amount of detail on offer; certainly more than you'll see from any 720p camcorder. Colours looked natural, without the tendency to display overly vibrant shades that some other models suffer from. In poor lighting conditions we were again impressed by the quantity and accuracy of colour, but it was marred by lots of fine noise.

We were stunned to find that the bit rate of our test footage averaged a massive 20Mbit/s. Even given the quality of the resulting video this seems unnecessarily large, making the files as unwieldy as those from serious AVCHD camcorders. It also means you'll get less than an hour of footage on an 8GB SDHC memory card. There's no built-in memory for storing files on the HMX-U10, and no card is supplied.

It's worth considering where your footage will be watched. The success of mini camcorders is linked to the popularity of video-sharing sites such as YouTube. YouTube does now support 1080p HD uploads, but our early tests show that the limited bit rate doesn't make the most of a Full-HD resolution. You can shoot at 720p with the HMX-U10; this doesn't reduce the picture noise issues, but it does reduce file sizes to a more manageable 10Mbit/s.

There are plenty of other settings available, from silly video filters such as sepia to fun extras including slow motion and time lapse photography. It's the polar opposite of the simplified options found on Flip's UltraHD. Thankfully, the extras don't complicate basic operations.

There are three proper buttons for recording, playback mode and taking digital stills, with everything else relegated to the touch-sensitive controls below. The U10 is both slender and lightweight, being small even by mini camcorder standards. Its subtly curved outer casing means it more comfortable to slip into your pocket than the Flip UltraHD.

Samsung's Intelli-Studio software is built into the U10, and launches automatically when you connect it to your PC via USB. It's a little fiddly to use at first, with multiple windows, but you quickly get used to the layout and can then upload videos to YouTube or photos to Flickr. You can also quickly copy new files to your PC and make basic edits. It's fine, but not as streamlined as Flip's equivalent.

There's no built-in USB connector as there is on the UltraHD, so you'll need to carry a USB cable to upload files on the go. Sensibly, you can charge the internal battery over a USB connection, although a standard charger is also supplied. The battery lasted one-and-a-half hours in our continuous recording test, which is respectable, but you can't swap it for a pair of standard AA batteries should you run out of juice. There are also component and AV outputs, but no HDMI. 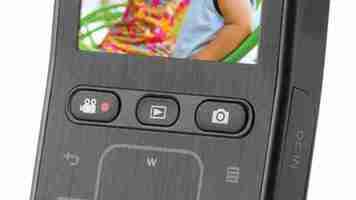