The rotary knob lives on! BMW previews next generation iDrive

If you’re looking for a reason to feel old, let me help. BMW’s proprietary infotainment system, iDrive, is 20 years old this year.

To celebrate, BMW took a look back at the tech and teased a few changes that will come with the latest iteration of the system that will debut in the iX electric car, at this year’s CES.

In the iX, BMW will follow the trend for massive dashboard screens, which is a welcome addition. Compared to cars like the Tesla Model S or Polestar 2, the screens in BMWs have started to seem a little small of late.

But best of all, BMW is keeping its analog rotary control knob and is not removing it in favor of voice inputs or touchscreens.

In the early days, iDrive was a little rough around the edges, and the rotary control was a little more confusing than it needed to be.

Turning it would scroll through menus on the screen, and it could also be pushed forward, backwards, left, or right, to perform dedicated functions.

Over the years, this system was refined, and buttons were introduced to allow users to navigate quickly to certain functions like navigation or music.

Using the latest iDrive system is quick, easy, and can be done without taking your eyes off the road. It’s not just the software design that makes it so useable, its physical ergonomics also deserve some of the praise.

Just drape your arm over the center armrest, and there it is, teasing your fingertips.

In recent times, BMW has added gesture controls, which let drivers skip tracks and turn up the volume, by just waving their hand around in front of the dashboard.

The German automaker has also added touchscreens to some of its vehicles, allowing for more direct human input.

But it’s never got rid of the rotary knob, and we should all rejoice, because it’s simply the best input control of any vehicle’s infotainment system.

In fact, I’d even go so far as to argue that it’s so good and so iconic to BMW vehicles that it’s become as important as the kidney grilles, Hofmeister kink, and propeller inspired roundel.

The next generation iDrive system will hit the market in the company’s flagship electric car, the iX, which will be out in 2022.

Sure, BMW‘s iDrive wasn’t the best system to begin with, but the German automaker has stuck to its guns and refined it over the years. It’s now one of the best systems around, and we should respect BMW for not ditching it in favor of more futuristic sounding and marketable input methods.

Earlier this week, American carmaker Dodge announced a new security feature for its wroughty and naughty muscle cars, the Challenger and the Charger. 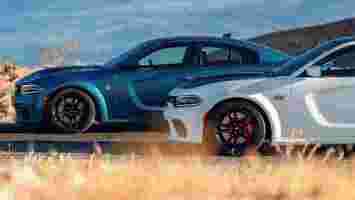 Now, normally we whisper names like that over here on SHIFT, because electrons are the order of the day, not gas-guzzling quarter-mile machines. But we do like it when cars get safer or more secure, so we took a look at Dodge’s announcement.

…and came to the conclusion that it makes no sense, whatsoever. Seriously, I’ve scratched a hole in my head for the past few days.

That’s why I asked an expert — and Dodge — what the heck is going on . But before we get to that, let me explain what’s causing my confusion.

In short, Dodge’s new security feature is a type of two-factor authentication. Before starting the car, the driver has to input a four-digit code into the infotainment screen to unlock its full potential.

If the driver doesn’t punch in the code, the car will enter a low-power mode where its engine won’t rev beyond idle.

This kind of tech is nothing new. It can be enabled as an option on Tesla vehicles, and it has also been used on Peugeot and Citroën cars — in fact my dad had it on one of his old cars, he tells me it was nothing but a faff, anyway…

Dodge says their cars will be limited to 675 rpm, and produce less than 3 horsepower. In other words, it will roll away at walking pace. 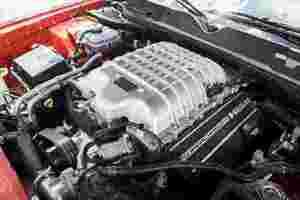 According to Dodge, it’s implementing the new security feature to add another layer of security to its vehicles, and prevent car key-relay thefts.

It’s great to note that this isn’t a feature only being added to new cars.

Owners of Chargers or Challengers, with either the 392-cubic inch HEMI V8 or supercharged 6.2-liter HEMI V8 engine and made after 2015, can all have the feature installed on their car for free. All they have to do is contact their local dealer.

But there’s one glaring question here: why limit power? Why not immobilize the vehicle entirely? That would be the ultimate theft protection. It makes no sense!

I spoke to Richard Billyeald, chief technical officer at Thatcham Research. If you don’t know Thatcham Research, the company investigates the safety and security claims made by carmakers. It made its name by rating car security systems for insurance companies.

Billyeald was as perplexed as I was. I laid out the situation, told him how I didn’t have a clue what the reason could be, and then asked what he thought was going on. His reply was simple: “I can’t say our answer is going to be much different.”

Billyeald conceded that there could be any number of reasons for why Dodge decided to limit power instead of cutting it completely — but he was still puzzled why it opted for doing just half a job.

“ I can’t see why you would want to allow the car to idle, why not just fully immobilize the car ?” Billyeald added. “I think it’s just a bit of an odd one, the way [Dodge] has chosen to go.”

Billyeald does make one thing clear, though: he’s very pleased to see a large carmaker like Dodge stepping up to make its cars more secure.

“I think the sentiment is right,” he said. “I certainly wouldn’t criticize it as a feature.”

Dodge is implementing the new feature in response to the 150 car thefts a day that occur in the US.

In recent years, as keyless entry has become commonplace, thieves have taken to using car key spoofers that relay the key’s unique signature to open the car even though its keys aren’t nearby.

This means a thief can open a car, and drive away, without having the actual car keys. However, if the driver also needs to input a code to start the engine, it adds an extra layer of security. Which is what Dodge is going for here.

It’s aiming to provide an extra layer of security to as many of its Charger and Challenger V8s as possible.

I managed to speak to Dodge to get clarity on the situation, and when we consider this approach, it makes a lot more sense.

The spokesperson explained that the Charger and Challenger muscle cars have different driving modes, street, sport, track, and most importantly valet mode.

Valet mode is typically used when you want to hand over your 700 horsepower beast to someone who might not be aware of just how powerful it is. Using valet mode restricts power and throttle response to make the muscle car a little more humane.

Here’s where Dodge’s new security feature comes in. The power restriction safety feature is effectively an extension of valet mode. But instead of restricting the car to a few hundred horsepower, it restricts it as much as it can: down to just idle power.

“Security Mode is based on the valet mode feature and allows the vehicle to be operated, under performance constraints,” a spokesperson from Stellantis, Dodge’s parent company, told me.

“Security Mode’s constraints effectively quash any drivability, but it does allow a P to D shift,” they added.

Dodge could have come up with a way to fully immobilize the vehicle, however, by simply modifying valet mode, the company can offer the security update to a greater number of its vehicles than otherwise.

A full immobilization program would have required a deeper reprogramming of driving modes, and may have impacted other aspects of the vehicle. Building a security mode on top of the already existing valet mode was an efficient way or bringing a new and useful security feature to as many Challenger and Charger owners as possible.

What’s more, only being able to drive away at a snails pace in reality might prove as successful at deterring thieves as a full immobilization. Especially when they’re expecting a fast getaway in a hyper powerful car.

Indeed, with car key spoofing thefts posing a real threat to owners of high-performance cars, it’s great to see that Dodge isn’t just adding this to its new vehicles, but is also offering it to existing owners of Chargers and Challengers made since 2015.

As ridiculous as it may have sounded to begin with, I think we can consider this mystery solved. And you know what, kudos to Dodge for trying to help as many of its drivers as possible, rather than just adding the feature to new vehicles.

Tesla remains the Big Daddy in the US EV market, despite new challengers

Nearly eight in every 10 electric vehicles sold in the US last year were made by Tesla. 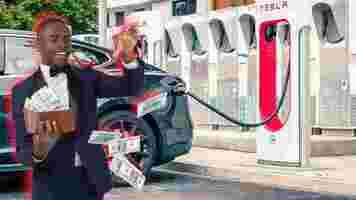 In fact, of the top five electric vehicles sold in the US in 2020, four were made by Tesla. The other, was the budget oriented Chevrolet Bolt, according to figures from Automotive News cited by Teslarati .

If ever there was a single statistic that summarized the state of the electric vehicle market in the US it is this: 79% of EVs sold last year were made by Tesla.

Tesla’s more affordable models, the Model 3 and Model Y, were the two most popular EVs of the year. The Chevy Bolt came in third, with the Model S and Model  X taking fourth and fifth spot.

When we dive a little deeper, it’s not entirely surprising that Tesla is still dominating the US EV market.

For one, it makes a more comprehensive range of EVs than any other manufacturer at the moment. Legacy automakers will never be able to compete with a carmaker that can corner more market segments.

Despite new challenges from the likes of Ford, VW, Jaguar, and Audi , none are able to compete in as many market segments as Tesla. Until legacy manufacturers make a complete shift to EVs or legislation bans the sale of new gasoline cars, it’s likely that we’ll see EV focused companies continue to stay ahead of the pack.