The Vodafone Smart Tab 4 is a 3G tablet which is just £125 on prepay from Vodafone. The 8in tablet is actually made by Alcatel, in a similar way to the EE Eagle being made by Huawei. The Smart Tab 4 is surprisingly good-looking for a low-cost tablet.

The Smart Tab 4's face is dominated by an 8in screen surrounded by a black bezel that's entirely branding-free. The chassis has a nice soft-touch plastic which is easy to hold and there was only the slightest hint of flex to the rear casing. There’s a headphone jack located on the top and a Micro USB port on the bottom.

On the left you’ll find the Micro SIM for the aforementioned 3G connectivity and a microSD slot. These are both tucked away behind a flap so there’s no risk of accidentally ejecting your cards. You can install a microSD card up to 64GB in size, which you'll most likely need as the built-in storage is a rather tiny 8GB. This leaves you very little space for apps and media after you take into consideration the space reserved for the Android operating system.

The power button and volume rocker are located on the right of the tablet, and on the rear is a mono speaker flanked by two small bumps that mean the tablet doesn't lie completely flat. It’s difficult to tell just how much difference the bumps make to the sound when the tablet is laid flat on a table, but we would rather they weren’t there as they interrupt the chassis' lines. The speaker itself is nothing special, sounding tinny but reasonably loud.

The Smart Tab 4 is powered by a 1.2GHz quad-core MediaTek MTK8382 system-on-a-chip. This is paired with 1GB of RAM. The tablet completed the SunSpider JavaScript benchmark in 1,314ms. This is a fraction slower than the EE Eagle and considerably slower than the similarly priced Asus MeMO Pad 7 . When browsing the web, though, performance was acceptable; around as smooth as the EE Eagle and slicker than the Archos 79 Xenon.

Gaming performance was also rather underwhelming. In our 3DMark IceStorm Extreme tests we observed slow framerates and a score of just 1,995, with 2,894 in Ice Storm Unlimited. The Vodafone Smart Tab 4 will at least be able to handle casual 2D games, although it will struggle with any graphically intensive titles such as Real Racing 3.

The screen has an IPS panel with a 1,280x800 resolution, which is proving common in compact Android tablets. This doesn't give you a particularly high pixel density, especially compared to the Google Nexus 7 with its 1,920x1,200-pixel display, but it produces fairly accurate colours and wide viewing angles. Text isn’t particularly crisp due to the resolution, but it was still comfortable enough reading on the display. Annoyingly there’s no ambient light sensor for automatic brightness adjustment; instead, you toggle between three brightness settings from the pull-down menu.

The Smart Tab 4 runs Android 4.2 Jelly Bean. This isn’t the latest and greatest version of the operating system, but most people won’t miss the extra features offered by Android 4.4 unless they're particularly wedded to Google Now. Vodafone has made very few changes to the look and feel of the operating system. Although navigating around menus wasn’t as super slick as on more powerful tablets, with some minor stutters here and there, the tablet's overall performance was smooth enough not to be frustrating in use.

Interestingly, the tablet's default keyboard is the SwiftKey app rather than the standard Android keyboard. SwiftKey has the ability to integrate with other platforms such as Twitter, Facebook and your email to learn your writing style and then offer tailored predictions for your next word as you type. It was also one of the first keyboards to allow gesture input, allowing you to swipe your finger through letters to spell out words, which is useful if you’re typing one-handed. SwiftKey used to be a paid app but is now available for free, so its addition isn’t as much of a big deal. It is, however, one of our favourite Android keyboards.

The Smart Tab 4 is equipped with a 2-megapixel rear camera sensor and a 0.3-megapixel front sensor, which are tiny resolutions by current standards. The front camera is just about good enough for Skype, but you'll be disappointed with its low-resolution images in self-portraits.

The camera app isn’t the default Android app, and its interface is quite basic. You’re able to capture burst images at about 3fps by holding the shutter button or using the volume rocker. There’s also a Night mode that slows the shutter speed down to allow more light to reach the sensor, but this just resulted in blurry images. The camera is one of the tablet’s weak points, so don’t expect quality captures.

The Vodafone Smart Tab 4 has good build quality, looks smart and its performance is more than adequate for browsing the web while on the go. It also lasted a very respectable 9 hours and 43 minutes in our video playback battery test. All things considered, for a tablet with 3G connectivity that costs only £125, the Vodafone Smart Tab 4 is a bit of a bargain. 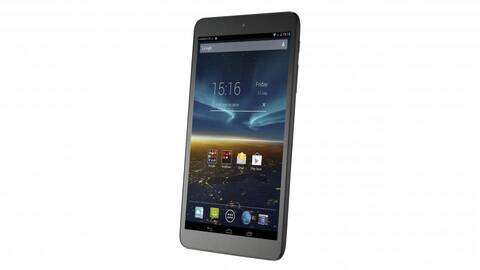